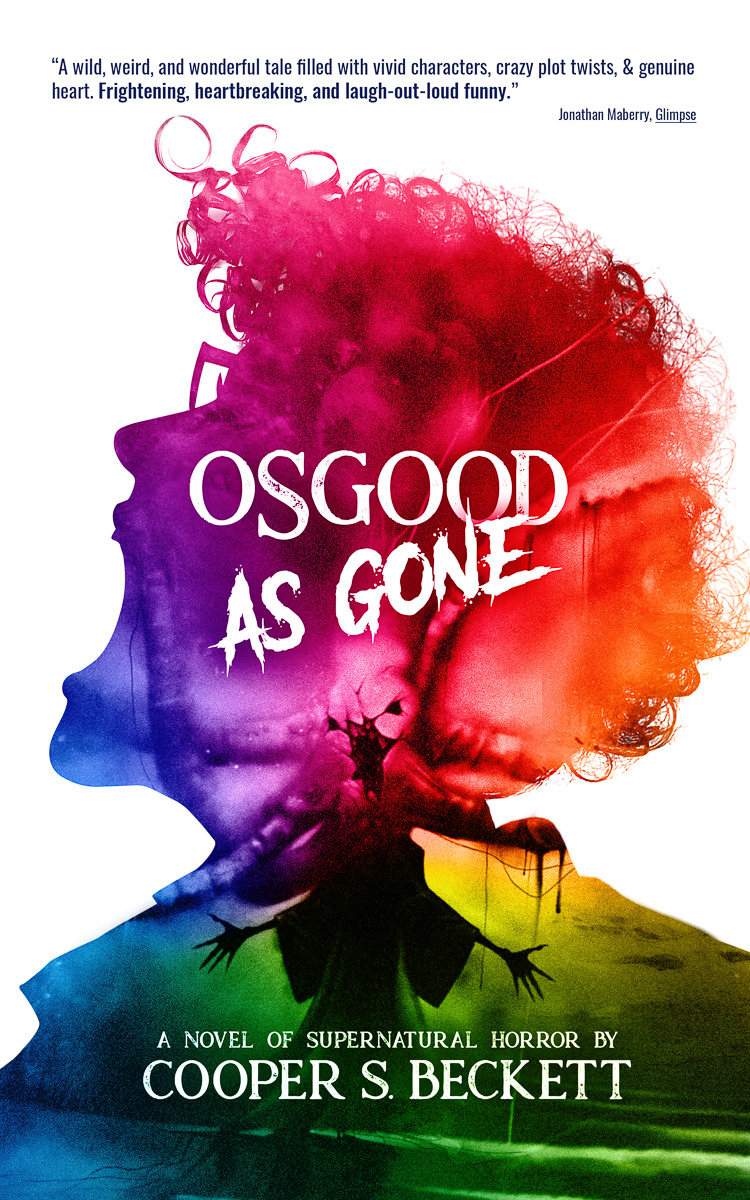 Once, Osgood and Frost were the up-and-coming stars of the burgeoning paranormal investigation TV show craze before a hoax put an end to their friendship, partnership, and television careers. Now, over a decade later, Prudence Osgood is a barely-functioning alcoholic ghosthunter for hire. Her yearning for mystery and adventure is reignited when she receives a cryptic, untraceable email. She can't resist embarking on an investigation that tugs threads winding through a sinister series of disappearances, her former partner's family, and a night twenty years ago when a semi blew a yellow light and nearly killed her.

Reviewers are calling Osgood as Gone “a masterfully vulnerable and relatable 21st Century horror story” and “a bourbon soaked supernatural mystery” with “sparkling dialogue” that “sticks the landing on LGBT+ characters,” and main character Prudence Osgood “as tortured as she is clever,” “broken in all the best ways,” and “a true heroine for our times.”

Osgood as Gone is the entry point for The Spectral Inspector series of supernatural horror mysteries. Each book will be self contained, but also connect to the overarching storyline. Book II: Osgood Riddance will be released in October, 2019.

Visit The Spectral Inspector website for more information at SpectralInspector.com

Praise for Osgood as Gone:

Prudence Osgood is a true heroine for our times – gritty, complex and sharp-witted, vulnerable but never broken. A darkly captivating mystery infused with the warmth of well-loved characters and an undercurrent of creeping dread.”

Claire C. Holland
Author, I Am Not Your Final Girl

Cooper S Beckett has created a wonderfully disturbing world in this ominous mystery brimming with fractured friendships and nightmarish scenes.”

A phenomenal book! It’s CreepyPasta by way of Stephen King and sticks the landing on LGBT+ characters. Creepy, funny, clever, and captivating. You’ll love this!”

Cooper S. Beckett lends his unique voice to the horror genre, weaving a tangled mystery filled with dark turns into even darker places.”

Osgood is an intriguing character filled with dark humor, vices, and a complex background. The quick banter, gritty plot, and development between the characters all weave together to create an adventure lurking with darkness. A tense mystery laced with urban fantasy vibes -- you'll want to pick up this first book in what appears to be a very promising series."

A blend of supernatural detective story, cosmic horror and dark humor that is impossible to put down. With a main character who will steal your heart as fast as her backstory will break it. She’s flawed and broken but unapologetically human throughout the twisted path she travels towards a horrifying truth that only a badass like her could confront. Loved every page!"